A luxury yoga retreat: my 5* yoga escape to Mykonos Greece.

Trendy, beautiful, stylish Mykonos Greece, and a sublime 5* hotel by the sea.

Mykonos is known as the star of the Aegean sea, a mecca for affluent holiday-makers seeking luxurious comfort in stylish white-washed dwellings with views of beautiful sandy bays and turquoise waters. 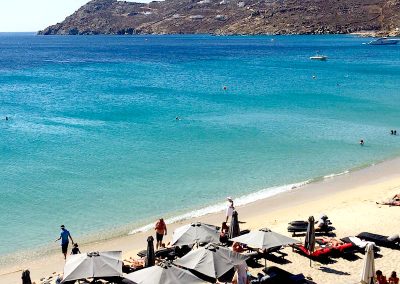 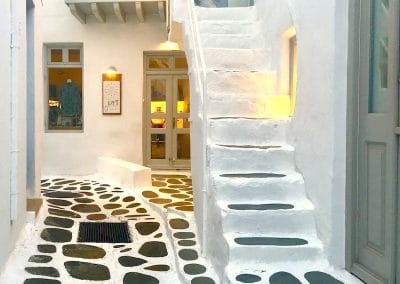 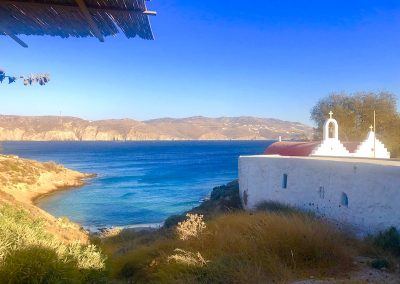 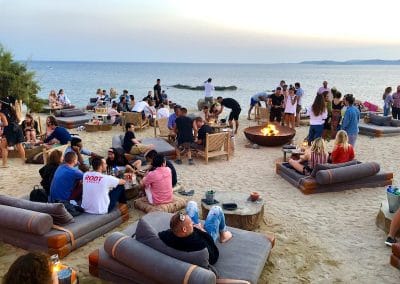 My 5* yoga escape to Mykonos on a luxury yoga retreat:

We stayed in the dreamy 5* Myconian Imperial hotel, a member of the Leading Hotels Of The World, where rustic charm is combined with elegant, sleek design. Perched above Elia beach, a quiet stretch of white sand, it has serious wow factor. Trendy, chic and very modern, the hotel is airy and spacious with a number of outdoor seating areas for guests to soak up the sea views. Rooms are fashioned in classy simplicity, offering a non-fussy sleeping space that is bright and comfortable. Laura goes so far as to handpick and inspect the rooms herself prior to her guests’ arrival to ensure everything is “just so”. Yes, that’s the level of personal touch to expect here! 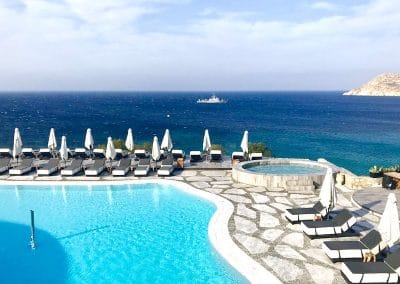 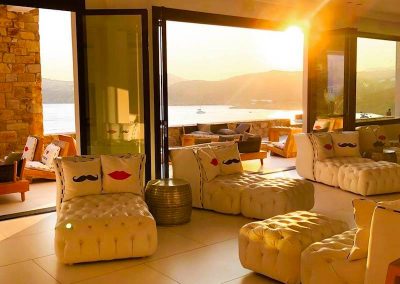 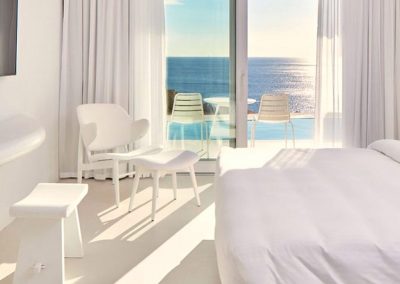 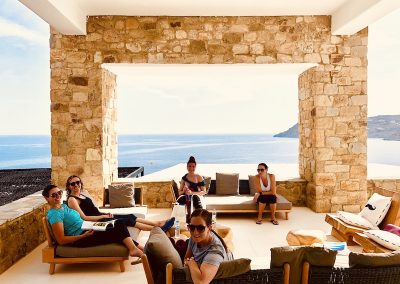 When choosing a yoga retreat, my best advice is to follow your teacher. It was when I heard that the wonderful Lizaan Jacobs would be leading the twice-daily classes that I hotfooted it to request the week off work. The rest of the group were quickly entranced by her extraordinary energy and exceptional teaching style. Every morning we eagerly met at 8:30am for a vigorous Vinyasa-style class; a dynamic and sweaty practice peppered with opportunities to launch into upside-down balances. Fun, fast and at times formidable, the flow lasted over 90 mins and was followed by a banquet breakfast, a real gastronomic temptress offering an endless buffet of wondrous treats.

The day was then free to spend as we wished. Most retreaters re-grouped at 5pm for a slow and soulful Yin session where we worked deep into the fascia, finding a more meditative state. Lizaan also treated us to a number of inversion workshops, which were not part of the schedule but generously offered in her free time to anyone eager for technique pointers. 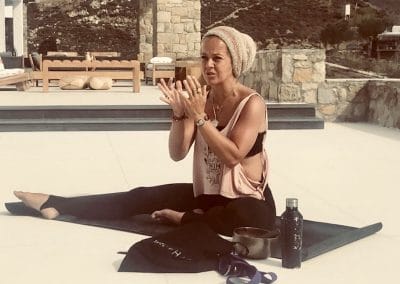 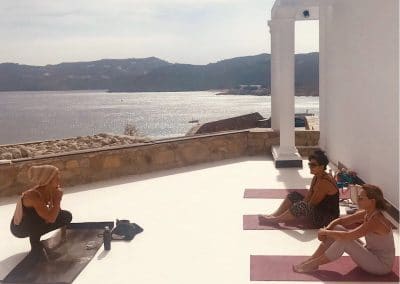 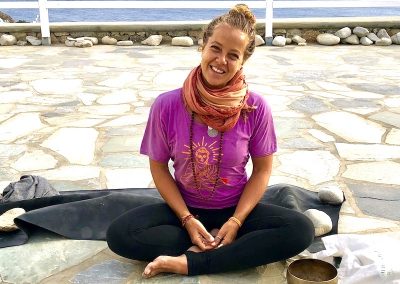 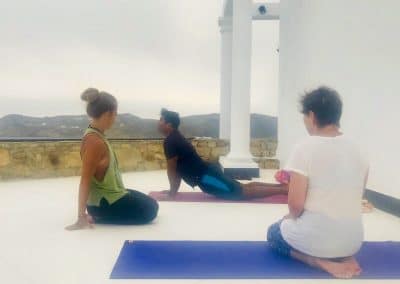 Group dinners in town and on the beach – and everything was optional.

Every evening a group dinner was arranged, but as with all elements of the retreat, it was purely optional. Some nights we kept it local, eating at the beach restaurant or a nearby village taverna, and other nights we took the free hotel shuttle into Mykonos town, wandering through the wind-beaten narrow maze of cobbled streets to find little gems handpicked by Laura. My only bugbear with group eating is trying to sort out the bill at the end of the night – but at least you’re sure to only pay for what you eat and drink so you can manage your own budget.

Lazy days and plenty of time to relax.

The days were extremely chilled…the most taxing thing to think about was where to lie in the sun. The hotel’s pool area was so divine and comfortable that I found it hard to peel myself off the lounger, even if it was to walk the 3-minute downhill to the hotel’s private section on Elia beach where more cushioned sun beds awaited. For an even deeper relaxation experience, you can enjoy a complimentary session in the thalasso-therapy and there is also a spa for extra pampering.

If you’re into a more energetic break then there is a small gym as well as lots of extraordinarily steep paths for walking or running surrounding the hotel – the views at the top are worth the effort. The free hotel shuttle runs into Mykonos town throughout the day too, which is about a 20-minute drive and additional excursions can be organised via Laura. 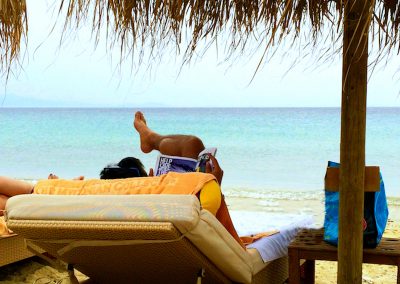 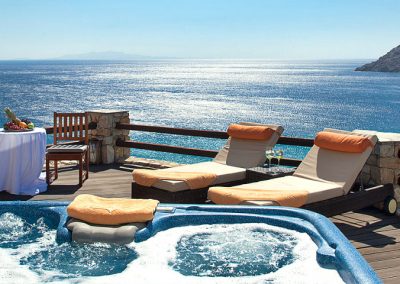 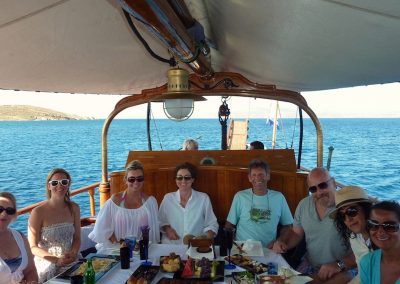 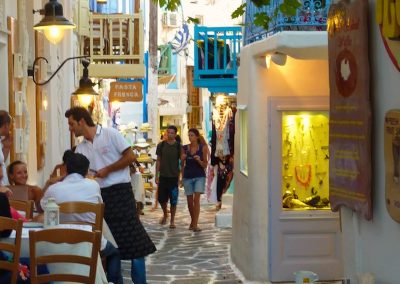 Many repeaters and solo travellers.

The age of our group ranged from 34-66 but the majority were in their 40s and 50s and most were holidaying solo. The fact that over half the group were repeaters is testament to the fact that Yoga Escapes organise a very well thought-out holiday experience. Retreats run from February through to December in a number of decadent locations, and I gather the Sicilian one in particular is pretty sensational. After a yoga retreat like this, you’ll be tempted to add “spoiling oneself” to the list of life’s necessities! 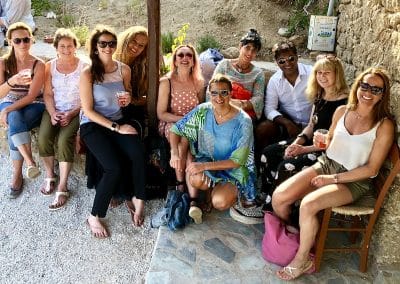 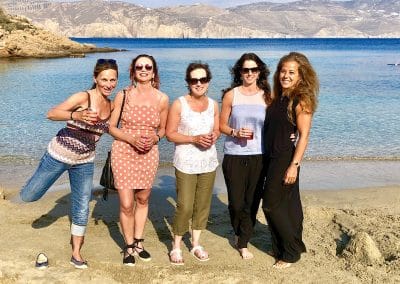 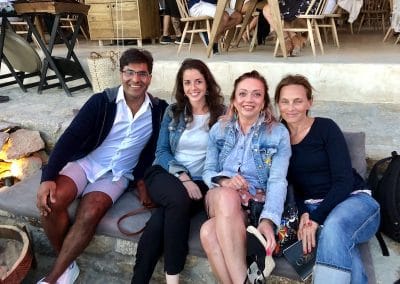 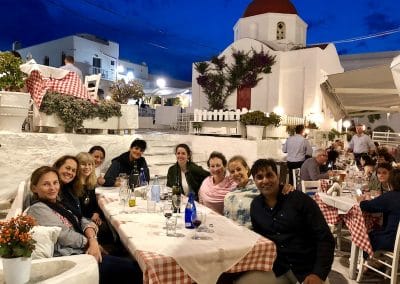 Yoga Escapes will host four yoga retreats in Mykonos with Liz Joubert, here are the dates:

They will also be hosting yoga retreats in Sicily Italy, Crete in Greece, Menorca in Spain, and Croatia – all at lovely 5* hotels on the beach. As well as one in Egypt on the Red Sea, in Lanzarote in the Canary Islands and one in Morocco.

All  dates and locations can be found on the Yoga Escapes’ website. 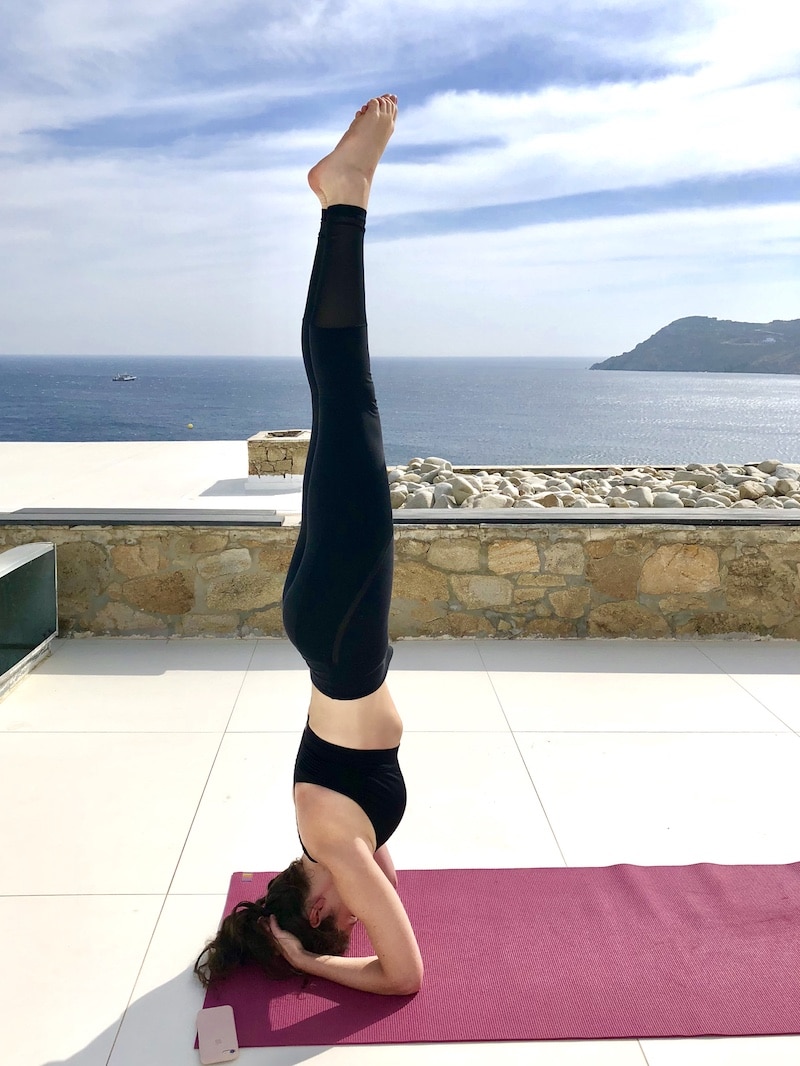 “The top 5 beaches in Mykonos Greece.”
“Mykonos Yoga Retreat – a 5-star week you won’t forget.”
“Mykonos yoga retreat: is there more to do than just yoga?”

Lanzarote Yoga Retreat – is a Luxury Yoga Holiday right for you? →

← Want to join a yoga retreat but not sure it’s Covid-safe?