The après-beach scene in Mykonos – sipping cocktails watching a beautiful sunset to a full-on party dancing on the tables. You pick. 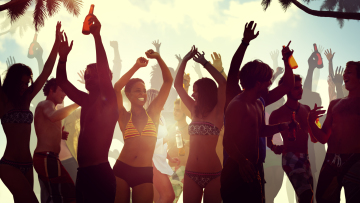 It’s about 5pm… and you’re relaxing on your sun bed on a gorgeous beach in Mykonos, just about recovered from the previous night dancing, when the DJ from the beach bar turns up the volume to the latest tunes, getting everyone in the mood for another evening of music and dancing.

Mykonos is famous for its nightlife, with clubs staying open well into the morning hours, but there’s also an afternoon beach bar scene which is just as popular and addictive.

From old-time classics to new glitzy beach clubs, Mykonos has a beach bar scene for all tastes and styles. Some places have been there for ages, while others have popped up in recent years – we know them well and have our favorites below. And in between yoga classes on our yoga retreats in Mykonos, you may just find us there enjoying a sunset drink!

Our recommendation for the top beach bars in Mykonos Greece: 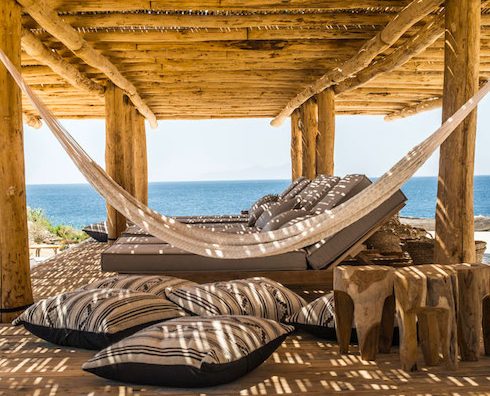 Located in between two bays with gorgeous views of Mykonos and a sunset spot that rivals Little Venice, Scorpios is considered by most to be the trendiest beach spot on the island.

Sharing the same name as the private island once owned by Onassis, Scorpios offers 24-hour hospitality and entertainment. Spend the day lounging on a sun bed, move effortlessly to the beach bar for a cocktail and world beats at sundown, and end the evening enjoying dinner at the relaxed Greek restaurant, dancing to the best DJs on the island.

It’s undoubtedly the place to see and be seen, but relaxed enough to make everyone feel comfortable. 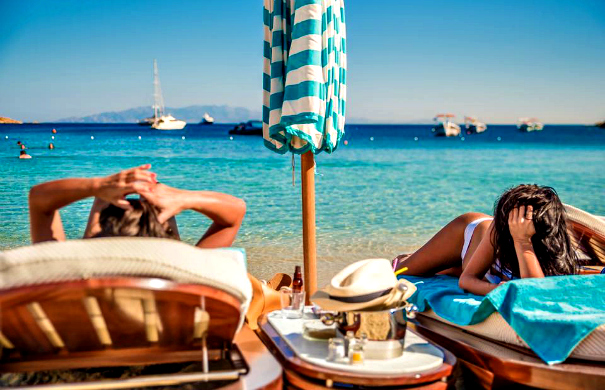 One of the first beach bar-restaurants to offer a sunset party scene, Nammos has been attracting the jet-set crowd to its white-washed restaurant by the sea for years. Expect flowing champagne, beautiful beach bodies dancing on tables, designer shades, and all the latest hits.

You’ll be hard pressed to find a table in high season, so book in advance or add your name to the list once you arrive to Psarou beach. Alternatively go to the restaurant for lunch and keep your table until the sunset festivities begin. When the restaurant is full, the party often extends to the beach in front of the restaurant, which some regulars actually prefer! 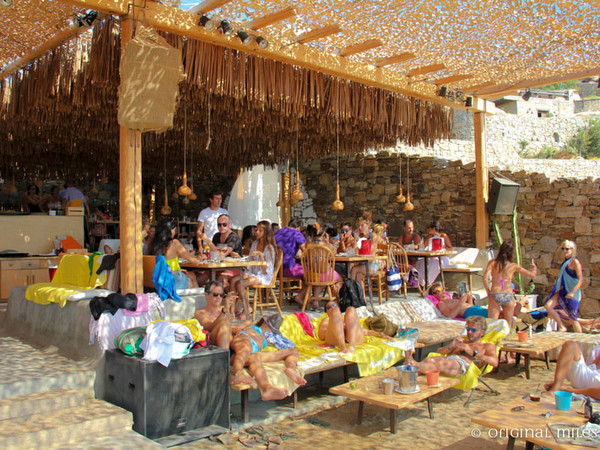 In the words of the owners, Alemàgou is a “bohemian setting you wouldn’t expect to find in Mykonos. Originally laid-back yet eclectic, totally relaxed yet elegant, both remote and cosmopolitan, rough yet refined.” And that’s pretty accurate!

It’s smaller and more intimate than Scorpios, but with a similar holistic-chic feel (minus the Burning Man waiter outfits). Follow a dirt road past a wind-swept beach (great for surfers) and you’ll feel like you’ve landed on a remote island far from the buzz of Mykonos town. 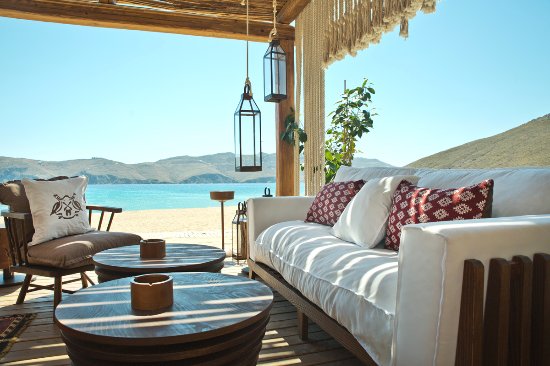 A recent newcomer to the Mykonos beach bar scene, Principote opened in 2016 on Panormos beach, replacing what was once pristine beach space on an otherwise serene beach. Some regulars mourn the old Panormos relaxed vibe, while others embrace this new beach club with all its glitzy glory. Think Dubai on the Med.

Comfy beach beds, a delicious restaurant and a relaxed bar, boutique shop, and valet parking – all the services and amenities you could ask for. And the music starts pumping early on, giving this beach a party feel all day long. Larger and more spread out than Nammos, it can also get quite busy in high season.

Super Paradise is one of the prettiest beaches on Mykonos – and not surprisingly the LGBT crowd figured that out early on, flocking to a wonderful beach bar-restaurant at the far side of the beach – the fabulous Jackie O’s.

Spend the day lounging around the pool area and bar with gorgeous views of the beach (and perfectly sculptured bodies). And be fully entertained with the daily drag-queen show at sunset – a Mykonos experience definitely not to be missed! 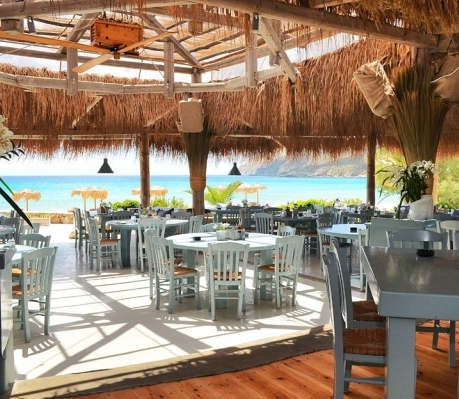 Located at the end of Kalo Livadi beach – one of the longest and more beautiful beaches in Mykonos – Sol y Mar is an old-time classic that has been around for years. The restaurant-bar is situated a bit back from the beach, but not too far to still get glimpses of the gorgeous blue sea.

The music starts quite early in the afternoon on the beach beds, and after lunch in high season the regulars turn the restaurant into a beach party. Some say its heyday has passed, but it’s still a nice option, with a prime spot on one of our favorite beaches of the island.

These are just a few of the most well-known beach bars… but there are some others that are worth a visit, depending on your taste:

Kalua – on Paranga beach, another classic, the music here is quite loud, perhaps a bit too loud for the space. But worth a stop for a cocktail.

Spilia – located on remote Agia Anna beach (there are two Agia Anna beaches – this one is near Kalafatis). Pick your seafood directly from the sea in front of you, enjoy one of the most beautiful views of the island as you sip a glass of rosé. Spilia used to be a very quiet and charming place with a special feel, but in the past couple of years they’ve turned the music up and have tried making it more of an after-beach party place, perhaps to fit in with the rest of Mykonos. A bit of a shame – some would say it’s lost its magic. Hopefully they’ll revert back to what made it special.

Santa Anna – a newcomer in 2017, Santa Anna is a large beach club on Paranga beach, some say too large for that beach, describing it as a Scorpios spill-over neighbor with an African feel. It definitely has a different style than old school classic Mykonos beach clubs, but it’s worth checking out if you’re near Paranga, we’ll let you decide what you think about it!

If you’d like to join us on a yoga retreat in Mykonos, we’ll take you to some of these place so you can experience Mykonos in both a relaxing yoga mode, as well as in a fun beach-party vibe. Why not both! 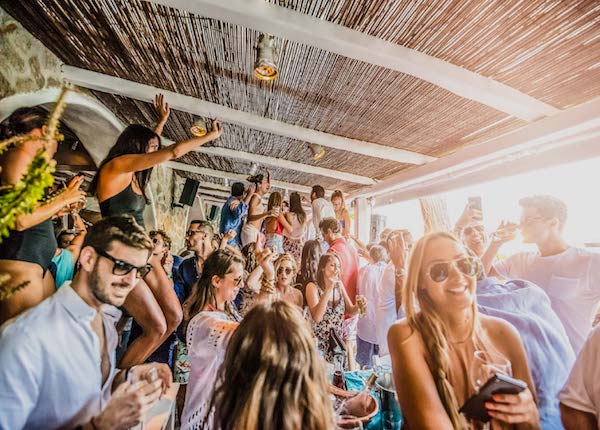 Our 2021 yoga retreats in Mykonos:

All the details about our yoga retreats in Mykonos can be found on our Mykonos yoga retreat page.

5 things not to miss in Marrakesh Morocco →